During the 1800’s, handcrafted luxury goods such as pocket watches were made for those who could afford them. It’s as if tracking the progress of time was made for the wealthy.

At the time, watch parts were made everywhere. Individuals would hand produced these parts to make a single watch. A man by the name of Aaron Dennison predicted that in 10 years, watches would be made by machinery. A completely radical idea in those days.He was ridiculed by many. He was, “the lunatic of Boston” as one magazine describes.

Dennison visited a gun factory and observed how interchangeable parts are made. With this idea in mind, he decides to make machines that would make watch parts in mass quantity. Everyone’s dream of owning a watch in this period in history now rest in the hands of the “madman”.

Armed with a few investors, in 1850 just 10 years after his prediction, Aaron Dennison built and founded what would later become the Waltham Watch Company. Faced with the difficult challenges of creating new machinery to make parts, Dennison runs out money and ends up selling his factory. He also ends up as one of the factory workers.

But while his boss was away on honeymoon, Dennison creates a pocket watch called the Ellery, named after one of the co-signers of the Declaration of Independence, Williams Ellery. His goal was to market the watch to the thousands of soldiers of the Civil War. At $13, the watch became a success and was affordable enough for everyone to buy.

45% of the soldiers of the American civil war owned the Ellery. Abraham Lincoln was presented with the William Ellery model 1857 and it’s currently displayed at the National Museum of American History in Washington DC.

Thanks to Aaron Dennison’s innovation and the industrial revolution. About 40 million watches, clocks speedometers and other timing devices were produced by Waltham. It’s manufacturing facilities in Waltham, Massachusetts have been preserved by the historic district.

Thanks to Steven Johnson’s book, “How we got to now” for the inspiration of this story and Wikipedia entry of Waltham and Aaron Dennison.

The Vulcain Panda is featured on Gear Patrol

The Butex Panda has been featured on Gear Patrol

The Wakmann Blue Yachting is featured on Gear Patrol 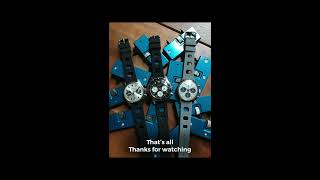 The Vulcain Panda is featured on Gear Patrol

The Butex Panda has been featured on Gear Patrol

The Wakmann Blue Yachting is featured on Gear Patrol